40 inches? Hope that helps your drought conditions a little. It snowed once here back in November about 2". The last two days have been in the 60-65* range. Real January weather here.

I've been a little busy around here. I finally decided it was time to retire my old Stihl 026. I bought it 26 years ago and it has seen a ton of use and abuse. A few years back it got a piece of carbon caught in its throat and seized up rock solid. I bought a new piston and cylinder for it and got it going again. It has also had several impulse tube and fuel line replacements along with a couple of new carburetors as a result of the crappy alcohol fuel we have now. The impulse tubes have been really hard to find for it.

Started a new bow. I'm going to use Curly Tiger Maple for the laminations with a Hickory core. I decided a black core would be good for contrast so I dyed the Hickory laminations with black leather dye. It looks like they saturated all the way through and I'm going to let them dry for at least a week before proceeding to the gluing stage. I'm trying to video the steps because this one may be a donation for a fund raiser.
Charter Member--Oklahoma Selfbow Society
OSS Non-Resident Representative
Charter Member--Prairie Traditional Archers
NRA Endowment Member
NAHC Life Member
Made in the image of a lion shocked lamb
I am who the hell I am
Top

Haven't done much so far this year. Replaced a bunch of 1" blinds with 2" around the house until I ran out. Lots of fiddling around to begin with, but by the time I was on number 4 it went easier; strange how that works out! I hope to get out in the woods tomorrow.

Today was the last of a four day M/L deer season. I just didn't want to be out there with who knows what packing a gun. Fish & Game made it buck only after December 1 on public land, although on private property you can still get does. The rationale was that the deer numbers are way down. So why not close doe hunting on private also?

I was told that this was agreed to by a survey of hunters, but no one I know of was asked about it. Oh well, I haven't seriously hunted since I retired. Mostly I wander through the woods with the dogs so if I see a deer it's the South end of a North-bound critter!

Spent most of the afternoon prepping blanks to make some deer grunt calls. These will be donated to the Oklahoma Selfbow Society for their raffle and auction at next month's banquet. The raffle and auction are fund raisers for the selfbow jamboree in March.

I've got two Zebrawood, one Red Oak, and one White Oak plus some chrome bands I made yesterday. 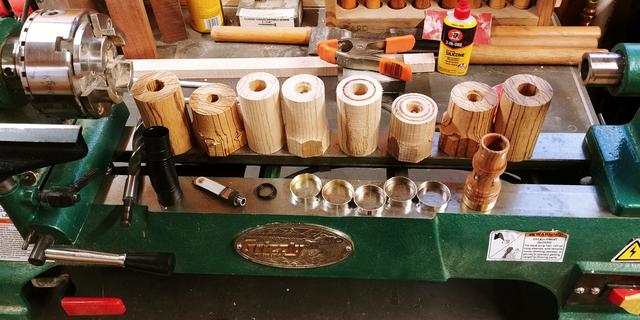 A week of warm melted a lot of the 40+ inches of snow... but we still had about half of it when the latest storm started up... added another 8 inches at least,so far. Still snowing and will till morning. None to sure what it will look like when we get up in the morning.

WH I tried to get a January tag for my neighborhood... There's a buck here tearing up all the saplings and he nearly destroyed my wife's weeping cherry tree, and he has wiped out the almond trees!
[size=85]"Never utter these words! 'I do not know this—therefore it is false.'
One must study to know, know to understand, understand to judge."
The apothegm of Narada,
an ancient east Indian philosopher[/size]
Top

Finished the lathe work on the deer calls a little while ago. Now they need a finish coat (or three) sprayed on. 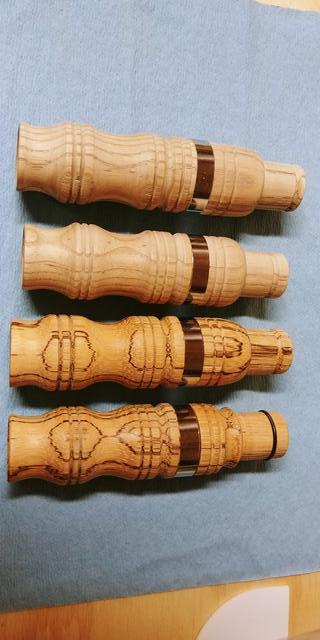 Tuesday was beautiful weather, with a forecast of "icky" to come so the dogs and I went off for a hike while we could.

I finished up the deer calls this morning and got them to the post office. They are headed for Edmond, Ok. for the Oklahoma Selfbow Society auction and raffle at the banquet next weekend on the 2nd. 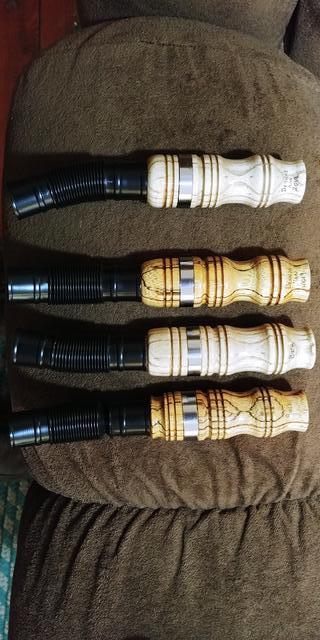 My daughter gave me an Academy Sports gift card for Christmas so I bought a Center Point tactical combat battle sight red dot for my .223. I also did some changes to the handguard and gas block on the rifle as well. I am going to use it for coyote hunting in the timber and strip pits around here. I started out at 25 yards and then moved to 50. Upper three shots are the first three from 50yds. Lower three are after one more adjustment. The 3MOA dot just about covers the orange center of the target at 50yds.

I believe I am sighted in at minute-of-coyote now. 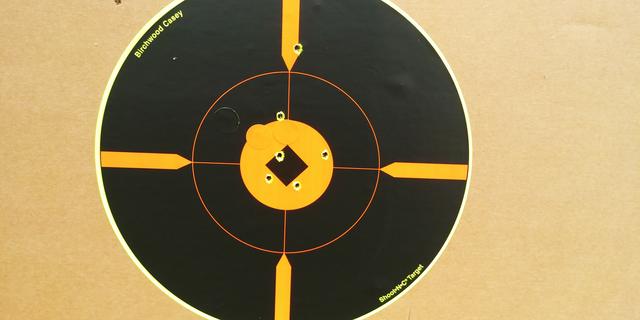